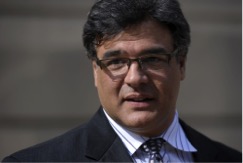 Interview with John Kiriakou, the ex-CIA officer who blew the whistle on the US torture program, about his new book “Doing Time Like a Spy”, European and US whistleblower politics and “Trumpileaks”. Conducted by Ali Fahimi from Whistleblower-Netzwerk e.V. in Washington D.C. (09.06.17).

WBNW Why did you quit your job at the CIA and was the decision connected to a specific experience that you made? How do you make your living today?

WBNW Are you satisfied with the results of your whistleblowing about the CIA torture programme? What kind of structural changes did you expect and in how far have your expectations become reality?

Kiriakou I am satisfied, but it took me years to get to that position. In the immediate aftermath of my whistleblowing, I was distraught that the focus was on me, rather than on what I had revealed. I wanted the torture program to be a matter of national debate. Instead, the debate was about criminal charges that were levied against me. That changed in 2015, however, thanks to Senators John McCain and Dianne Feinstein. With passage of the McCain-Feinstein Amendment to the National Defense Authorization Act, the ban on torture is now the law of the land.

WBNW What did you learn from your trip to Europe and where do you see the main differences between the European and the US perception of whistleblowers?

WBNW How successful have you been with your new book publication “Doing Time Like a Spy“ and do you observe a different reaction from Europeans compared to US citizens?

Kiriakou I’m proud to say that the entire first edition sold out in the first 10 days after publication, and the publisher ordered a second printing. In addition, sales have been so strong that the publisher has ordered a paperback edition of 10,000 copies to be released next spring. I have found, again, Europeans to be more welcoming of what I’m saying in this book. Americans are far more skeptical and much less willing to admit that the US has a problem with its justice system. Most Americans simply deny that the justice system is racist, xenophobic, and unfair, especially to people of color. 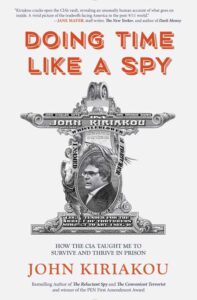 WBNW What do you think are the most important pillars of support that a whistleblower can get from a whistleblower support organisation and what has helped you the most?

Kiriakou In my view, the single most important form of support that a whistleblower support organization can supply is legal assistance. Most attorneys know nothing about whistleblowing and whistleblower law. Legal defense is prohibitively expensive. (I didn’t even go to trial and I ended up spending $1.1 million.) At the same time, governments set out to ruin the whistleblower financially, professionally, socially, and personally. The whistleblower is worrying the most about freedom. Only an attorney can help with that, and almost no whistleblowers can afford one.

WBNW As you know, there is no whistleblower protection law in Germany. How important is the existence of such a law?

Kiriakou I think the establishment of a whistleblower protection law is critical in every country. Without legal protections there is almost no incentive to report evidence of waste, fraud, abuse, illegality, or threats to the public health or public safety, especially when the government will turn around and prosecute the whistleblower.

Kiriakou Thank you very much for this. Whistleblowing is a very difficult decision. But SOMEBODY has to say SOMETHING about these issues. I do think that courage is contagious. I wasn’t sure about this until 2014. I was sitting in my prison cell reading a four-day-old copy of the New York Times, when I saw an interview with Edward Snowden. In the interview, he said that NSA whistleblower Thomas Drake and I inspired him to go public with his own whistleblowing. That made it all worthwhile to me.

WBNW As I understood, you did not go to prison for blowing the whistle on the torture programme, but for accidentally disclosing a CIA Officer’s identity to a reporter. This e-mail exchange was then used as evidence to charge you under the Espionage Act. Even if the initial motivation for looking into your case so closely was your interview about the torture programme, does it make any difference for you that you were convicted for a different matter and why could the authorities not convict you for your whistleblowing on the torture programme?

WBNW Even though Trump has said to increase the prosecution of whistleblowers, it seems like there have never been so many leaks in Washington like these days. According to former FBI-Chief Comey’s memos, Trump even urged him to consider to jail journalists for publishing classified information. Is such a policy just a continuation of Obama’s policies on whistleblowers or is this a new level of escalation in the US administration’s fight against whistleblowers? Moreover, to what extent does such a tone from the top threaten US democracy?

Kiriakou Such a policy is most definitely just a continuation of the Obama policy. Obama, whether we liberals like it or not, was the enemy of transparency. Remember, it was Obama’s Attorney General, Eric Holder, who called Fox News reporter James Rosen an “unindicted co-conspirator” because he had published allegedly “classified” information. Obama also prosecuted eight national security whistleblowers under the Espionage Act, nearly three times the number prosecuted by all previous presidents combined. We should expect the same from Trump, but we also should not lionize Obama. He was worse than Trump.

WBNW Just recently 25 years old Reality Winner was arrested under the Espionage Act for leaking an NSA document about Russian hackers during the presidential campaign. One of the reporters who published the news about this document and sent it to the NSA to verify authenticity, which ultimately led investigators to Reality Winner, was Matthew Cole. This is the same journalist who approached you for disclosing information about CIA officers. First, which responsibility do journalists like Cole have when they reveal information that they receive from whistleblowers? Second, being charged under the Espionage Act means that Reality Winner’s career is ruined. Is this fair to you and what kind of advise would you give her, given that you blew the whistle yourself and have overcome this extremely critical situation in your life?

Kiriakou I would like to answer this question by referring you to a recent column I wrote about this specific issue.

WBNW Michael Moore recently announced the establishment of the online platform “Trumpileaks”. The platform shall serve Trump’s employees to blow the whistle on Trump’s wrongdoings. What do you think about such an initiative to react on Trump’s abuse of power and do you see the risk of establishing a culture where people feel uncomfortable to say their opinion because they feel surrounded by potential leakers?

Kiriakou I think this is a great move, so long that Michael Moore’s point is to encourage whistleblowing. Remember, there is a difference between leaking and whistleblowing. Leaking is just leaking for one’s own purpose. Whistleblowing is in the public interest. It is bringing to light any evidence of waste, fraud, abuse, illegality, or threats to the public health or public safety.

WBNW John Kiriakou, thank you very much for the interview!