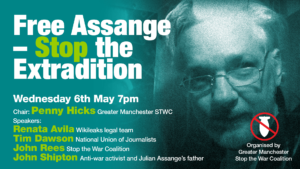 Julian Assange is fighting extradition to the US where he faces 175 years in prison for espionage. His crime? Publishing evidence of war crimes in Afghanistan and Iraq.

Despite having served his sentence for violating bail and despite the danger of Covid-19 the torture of Assange in Belmarsh High Security Prison continues. The hearing set for 18 May has been postponed – possibly until November – due to the coronavirus lockdown. Under current conditions Assange is unable to prepare his defence and his life is at risk.

The Assange case is an attack not just on an individual but on press freedom. Journalism is not a crime.