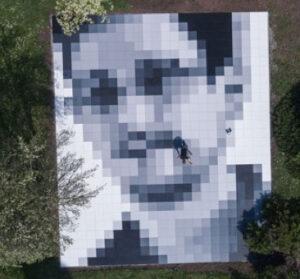 For the exhibition “Luther and the Avant-garde,” the artist Achim Mohné developed the idea for an Edward Snowden portrait composed of 672 concrete slabs on a lawn between the former prison and courthouse in Wittenberg. Based on a shared interest in furthering democracy and supporting whistleblowers, Achim Mohné answered questions posed by the Whistleblower-Network (interview conducted by Ali Fahimi on 05/17/2017 in the office of the Whistleblower-Network, Berlin)

WBNW How did you come up with the idea of choosing Snowden for the theme of Reformation in the exhibition “Luther and the Avant-garde”?

Mohné The medium of printing, which was “fast” at the time, made the Reformation possible for Luther; Edward Snowden’s worldwide disclosures beat today’s prevailing digital technology at its own game. Both “whistleblowers” aimed at revealing systematic injustices. Lucas Cranach’s Luther portrait is an icon of the Reformation; the portrait of Snowden circulating around the world stands for the personified resistance against digital surveillance methods. Paradoxically, the portrait of Edward Snowden, consisting of 672 concrete slabs and measuring 12 x 14 meters, cannot be recognized on the ground. It only becomes visible by means of a surveillance medium. As soon as it is captured by satellites, it also appears on Google Earth, Apple Maps and other navigation systems. So Snowden can return to the United States at least virtually in this manner.

WBNW What message does your artwork seek to convey to people?

Mohné In the digital age, the most important changes of a thoroughly technologized society are no longer triggered by theologians, humanities scholars, artists, or politicians, as in earlier ages, but by engineers, who are the only ones still capable of analyzing complex processes (at least partially). We are being outpaced by technological developments progressing so rapidly that we can no longer comprehend all their effects. They literally overwhelm us like a tsunami.

WBNW Why do you find whistleblowing so important?

Mohné For me, “whistleblowers” today stand for an important counterbalance in democratic societies. Digital miniaturization facilitates secret operations that are often conducted by violating existing democratic rights. This is carried out unabashedly, since the actors can do what they like without being controlled. It is usually only possible for insiders and experts to expose these machinations. “Whistleblowing” will be even more relevant in the future. Democracies can no longer do without them. Those in power must increasingly fear them. This still requires people who are willing to pay a high price for defending humanistic values.

WBNW To what extent can artists further democracy and human rights with their art, and at which points does art intersect with political activism in your view?

Mohné Since 2009, “Civil Disobedience” has been standing on the roof of a building in a middle-class residential area in Essen, Germany. REMOTEWORDS is an artistic-political project I have been pursuing with Uta Kopp in the new public space of the internet since 2010. http://www.remotewords.net It is a term coined by Henry David Thoreau, who as early as the mid-19th century sought individual freedom and independence. He championed the right of the individual to impinge on valid legal norms if they were unjust or wrongfully harmed the freedom of the individual. For example, he refused to pay taxes for a war against Mexico. Especially today, art is challenged to act, for artists also belong to civil society and should contribute to it. Making nice pictures just isn’t enough anymore. An example of such a contribution against separatism, populism, and political agitation was the collaboration with Peter Weibel. His sentence “ONE EARTH UNITES MANY WORLDS” is spread across five roofs on five continents. http://zkm.de/blog/2015/09/die-erdoberflaeche-als-weisse-leinwand

WBNW For your project, you use images and videos shot by drones. This technology is responsible for war and death elsewhere. What is your stance toward an increasingly technologized society, and what role do drones play in the digital age?

Mohné I have been working with surveillance technology since the mid-1990s and with drones since 2010. I used them for the first time at the Moscow Biennale, when they were still fairly new. Today, they can be seen in all television formats. Like many inventions, e.g., video or laser technology, they are a result of military research and initially did not serve a good purpose. For me, drones represent the most perverse stage of military development, which has become totally abstracted from former hand-to-hand combat. Somebody sits in Texas and kills people in Afghanistan via remote control. But drones can also be useful. For example, they are used to transport medicine to remote and inaccessible areas.

WBNW You said that it “still requires people who are willing to pay a high price for defending humanistic values.” We ask: Is courage infectious, and if so, in which way?

Mohné Courage is definitely infectious—and, unfortunately, moral cowardice as well. That’s the reason for this “tribute” to Snowden, a call not to forget him and to honor his achievement. Hundreds of NSA employees would have had the possibility to disclose injustices. But Snowden is the one who did it. That’s the decisive difference. The way technology is handled depends on the individual and one’s moral attitude. But Snowden is just one prominent example of many whistleblowers throughout the world. That’s why I’m glad that we are cooperating, because you support precisely those people who distinguish themselves through civil courage. That makes the Whistleblower-Network so important.

WBNW How important would a response by Edward Snowden to your project be?

Mohné I informed him about the work via Twitter. He may be a “public figure,” as they say, but I think it is a matter of course to inform him. I would be very interested to hear his opinion. His statement, “I am not the story,” in Laura Poitra’s film shows how modest he is in regard to his own person.

His portrait has become an icon of the incredibly complex interplay between state, power, politics, technology, and humans. I would be happy if he shared my intention: It is not about personality cult, but about defending the most important social achievement of the past centuries: democracy.